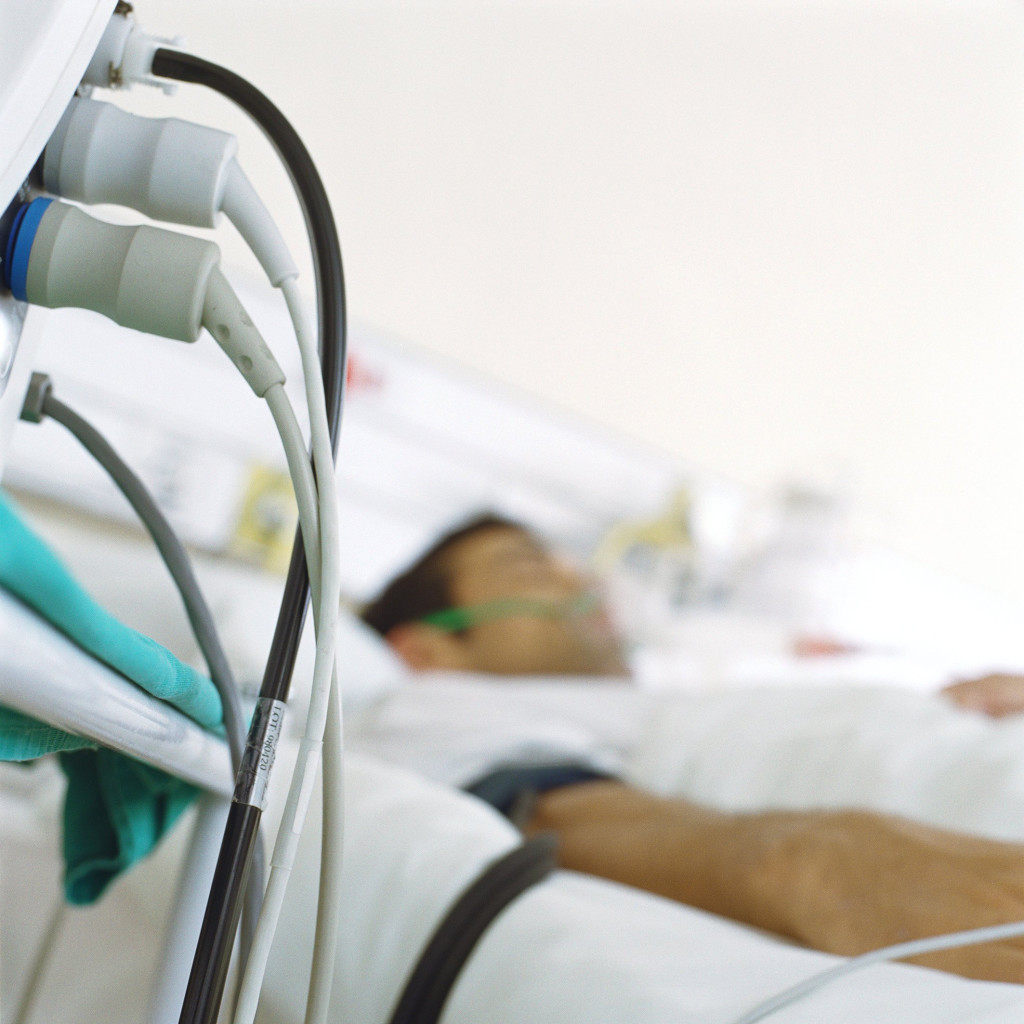 None of the authors have any conflict of interest.

INTRODUCTION: Shortage of intensive care beds in Denmark has been reported for many years – in 2004 a concerted action was taken to improve the care taking of critically ill patients. The efforts included the establishment of additional ICU and high dependency (HDU) beds and increased managerial attention.

METHODS: A questionnaire addressing type of the ICU, level of classification, level of specialization, size, number of HDU beds, exploitation of capacity, number of transfers dictated by lack of capacity, transfers to another ICU and a question addressing the personal opinion of the head of ICU to the capacity was distributed to all ICU´s in Denmark in spring 2014.

CONCLUSION: The number of accessible ICU beds in Denmark is 441 in 2014 – a 10% increase compared to 2004. The occupancy rate is still high in Level 3 units; the average discharge rate of patients from ICU departments due to lack of capacity is 2%, well below national standards. Level of education of nurses and doctors and the managerial attention to workflows has increased significantly.

In Denmark we have a history of shortage in ICU-beds. On request from the Ministry of Health the Danish Health and Medicines Authority in 2004 performed a survey of the capacity of ICU-beds in Denmark [1].

A shortage of beds was demonstrated based on a substantial number of in- and external transfers and a substantial numbers of cancellations of major elective surgery. In 2004 a prospective inventory was initiated by the Danish Society of Anaesthesiology and Intensive Care Medicine (DASAIM) and the Society of Intensive Care (DSIT) which aimed at describing the extent of the problem [2].

In this overview, it was confirmed that the numbers of transfers caused by a lack of ICU-beds and cancellation of elective surgery was extensive and reached an unacceptable level. A significant share of the directors of ICU in the most specialized units (68%) indicated that the lack of capacity was a weekly phenomenon. The authors suggested a number of solutions to reduce the problem – increasing the numbers of ICU-beds, increased focus on recruitment and retaining of staff and establishing high dependency units (HDU). In the subsequent years serious effort on the healthcare, managerial and political level was done in order to create a better compliance between needs and availability of beds.

It is our impression that the effort was overall successful. In order to objectify the point of view, we have recorded the present ICU-capacity in Denmark. The number of transfers caused by lack of ICU-beds, and the personal opinions of the Head of Department’s view on the available capacity.

In spring 2014 a questionnaire was distributed to the Head of Departments in the ICU’s in Denmark (n=39). Neonatal departments were not included in the present survey. One month after distribution, pressure for answers was conducted, if answers hadn’t been forwarded.

The questionary comprised questions as the type of the ICU (mono-/multidisciplinary units), level of classifications (according to the so called “specialeplan” – a healthcare speciality plan published by the Danish Health and Medicines Authority – “hovedfunktionsniveau” – main functional level, “regionsniveau” regional level, “Højt specialiseret niveau” – highly specialized level in ascending level of competence), level of specialisation, size, exploitation of capacity (indicated as occupancy rate), number of transfers dictated by lack of capacity, transfers to another ICU (another hospital) and a question addressing the personal opinion of the head of ICU to the capacity. Additionally, we retrieved information on beds in the ICU – specifying the total number of beds being equipped to take care of a patient (accessible beds) and the numbers of beds available (indicating the number corrected for transient reductions due to shortage of staff or financial restrictions) and numbers of high dependency beds in the hospital. In this overview we used the international definition on level of specialization of the individual department [3]: A level 1 department is typically situated in smaller hospitals and only provides intensive care to a limited extent. A level 2 department is typically situated in intermediate sized hospitals and provides intensive care to the normal population in the specific hospital. A level 3 department is typically situated in University hospitals. Intensive care units in the smaller hospitals (“main functional level) is typically Level 2 and 1 and intensive care therapy on the intermediate sized hospitals (regional level), is typically at level 3 or 2. In the most specialized University hospitals intensive care therapy is at level 3 and the expectation is that any kind of organ failure can be treated in these departments.

Monospecialized intensive care units, where patients are admitted after specific surgical procedures (for example neurosurgery) are all at level 3.

Thirty five questionnaires where returned. Information from 4 departments was lacking. We have taken directly contact to the 4 hospitals in order to retrieve information on the number of ICU beds.

The number of ICU-departments is indicated in Table 1 and type and level of classification and specialisation is also given. Data have been presented in this article according to the information given by the respondents.

The average number of beds per department has increased from 8.0 to 11.2.

Data from 1 unit is lacking.

The number of ICU-units in Denmark has dropped from 50 in 2004 to 39 in 2014 and the number of accessible ICU-beds have, in this period, increased from 401 to 441. The number of available beds has increased form 380 (reported on week days) to 385. It is noteworthy that this increase seems to be insignificant and a significant difference between accessible and available beds in 2014 is still present. Indication of accessible and in use beds is understandable, but should in our opinion be avoided. We recommend that the number of ICU-beds in a department is given as the number of physically accessible beds and that no correction for transient closures is performed. Our expectation is that all physically available beds are used if the need is present. The percentage of the ICU to the total number of somatic beds in 2014 is 3.3, which is an increase in relation to the figures in 2004. The major course to this significant increase is that the number of somatic beds in the same period has dropped from 163341 to 13296. The number of high dependency beds in 2014 is 101. Forty seven are positioned ICU’s and 54 in ordinary somatic departments. The historically development in HDU beds is insecure and difficult to interpret. In the report published by National Health Board on capacity in intensive care in 2004 [1], the number of high dependency units is reported to be 108. In an inventory from 2009 the figure is reported to be 52-59 in the period 2006-2009 [4].

European data on ICU capacity [1,5] is available. There seems to be substantial differences between the European countries, but direct comparison is difficult. Capacity issues in a country should be addressed in a national perspective.

In 2004 68% of the head of ICU’s in Level 3 departments reported, that they, on a weekly base, experienced under capacity. The equivalent number from the heads in Level 2 and 1 departments were 14% and 17%, respectively. In the present inventory 29% indicated, that they frequently experienced problems with capacity. A direct comparison between the data from the two inventories is difficult to perform.

The number of transfers due to lack of capacity is 2%, which is well below the national standard (5%) [6]. This transfer rate can be considered to be moderate and in an overall view acceptable.

From the patients and relative’s point of view, these transfers are, in the majority of cases, however not desirable. Transfers due to lack of capacity cannot be avoided – the potential risks associated with transfers have been minimized after introductions of transport systems using anesthesiologists, well equipped ambulances and well trained ambulance staff.

The reported occupancy rate is still high (averagely 82%). A capacity exploitation on 75%-80% has been reported as a level which should secure a decent balance between an acceptable buffer capacity and an acceptable exploitation of staffing resources [7,8]. The consequences of a high versus low occupancy rate and the consequence of this can and should be discussed. A persistent high occupancy rate is often the result of lack of ICU-beds, necessitating an increase in the number of beds or optimization of visitation procedures and workflows. A low number can implicate a real surplus of ICU-beds in the hospital. If a big difference in capacity exploitations in ICU’s in a well-defined region is present, a reallocation of resources may be appropriate.

No precise indication of an optimal occupancy rate integrating medical, fiscal and political issues can be given – it is however of paramount importance that all actors are aware of the consequences of shortage or surplus of beds. It is also mandatory that the patients are well informed of the risk of transfer and that all measures are taken to avoid multiple transfers (due to lack of capacity) of an individual patient.

From an overall point of view, it is our perception that a better balance between accessible ICU/HDU beds and the need has been established. It is however mandatory that we continuously monitor relevant indicators of shortage of ICU beds and also discuss if the national standards should be changed – is a transfer rate of 5% due to lack of capacity acceptable? The occupancy rates in level 3 ICU are in our opinion high and we foresee a need for additional beds in these departments in the near future. The introduction of mobile acute teams and implementation of physiologically scoring systems (e.g. EWS) has increased the attention and thereby presumably also the quality of treatment of the critically ill patients in Danish hospitals. Finally we have experienced a significant upgrading of the level of qualification in the staff. The majority of the ICU-nurses have undergone two year training in ICU and the doctors associated to ICU’s in level 3 departments do this in a full time scale. A high percentage of the ICU-doctors have passed the Scandinavian post specialist training (SSAI) program or equivalent European diploma (EDIC). Additionally optimizations of work procedures and exploitation of the staffing resources have had a considerable managerial attention in the last years. Finally it has been recognized that improvements in the processes of care and ICU structure as well as the use of quality improvement methodologies beneficially impact patient outcomes and reduce costs [10].

Table 2. Evolution of numbers of ICU departments, number of beds and occupancy rate

Table 4. Personal point of view on capacity problems of the director of ICU.